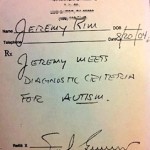 “I used to think my son’s disability, his “brokenness,” was intolerable.  But now I find myself glorying in my own.”

In 2004, my family stepped off a plane after one year of serving on foreign missions to Central Asia. We had taken our six-month old newborn, Jeremy, to a third world country few had ever heard of, until we explained, “It’s a country next to Afghanistan.”  Then, “Ohhhhh…” followed by lots of wide eyes and impressed nodding.

Deep down, it had been a pretty impressive step of faith, I thought.  My husband then committed to full-time ministry, as we delivered a glorious testimony to the faithfulness of God.  Surely, I anticipated, God must have even greater blessings in store for us.  He sure did; just not the way I’d thought.

A handful of months later, after having him evaluated for a speech delay, our son had been diagnosed with autism, followed by subsequent diagnoses of ADHD/Anxiety NOS and mental retardation.  In a nanosecond, my ebullient testimony evaporated.  All the spiritual credentials I thought I’d banked up were now gone.  I crumpled up my so-called spiritual resume and chucked it, thoroughly disgusted.  Now, I was nothing but pissed.

“How could You do this to us?  After all we’ve done to serve You?”

After twenty years of ministry, every weekend and family vacation revolving around the church calendar; my entire married life, I’d driven to church in the same car with my husband, the worship leader, perhaps five times.  After all this, the title of church staff felt like a cruel irony as I struggled bitterly in my heart, yet dutifully put on my “Praise the Lord!” mask at church.  But the dissonance was growing louder, and driving me mad.

That night Jacob got up and took his two wives, his two maidservants and his eleven sons and crossed the ford of the Jabbok.  After he had sent them across the stream, he sent over all his possessions. So Jacob was left alone, and a man wrestled with him till daybreak. When the man saw that he could not overpower him, he touched the socket of Jacob’s hip so that his hip was wrenched as he wrestled with the man. Then the man said, “Let me go, for it is daybreak.” But Jacob replied, “I will not let you go unless you bless me.”

The man asked him, “What is your name?” “Jacob,” he answered. Then the man said, “Your name will no longer be Jacob, but Israel, because you have struggled with God and with men and have overcome.” Jacob said, “Please tell me your name.” But he replied, “Why do you ask my name?” Then he blessed him there.So Jacob called the place Peniel, saying, “It is because I saw God face to face, and yet my life was spared.”  The sun rose above him as he passed Peniel, and he was limping because of his hip. ~ Genesis 32: 22-31

Like Jacob, everything I thought I’d accumulated was now gone.  Now, I suddenly had a handicapped child and a freshly crippled faith.  Both demanded healing — or at least some intensive, crisis intervention.  Left with nothing but bitterness and indignant questions, it also drove me to wrestle with God like never before.

“I am not leaving until You answer me!  I will not let You go until You bless me.  Restore my stuff, and restore my child!”

God’s response to my tantrum was to remind me who I was, a sinner.  Like Jacob, I was a deceiver who lived for appearances; accumulating reputation credits as a “Super Christian,” a deacon, the worship leader’s wife, even as a missionary. Such duplicitous motives stunk far more rank than all of Jacob’s livestock.  But all those trappings were now gone, “across the stream,” and I found myself up a proverbial creek without a paddle. I was wrecked, left alone to wrestle with who I was without them, and who God truly was in my life.

But He also reminded me that while I was yet a sinner, He loved me — fists raised to the skies and all.  A loving Parent is gracious and magnanimous enough to endure a spoiled child’s fit of temper.  He was a God big enough to look beyond my faults and see my need.  It took several years (my stubbornness was not easily overpowered), but my pride was ultimately wrenched by the grace of God.  But rather than getting my stuff restored, my soul was.  I was then given a new identity and purpose:  To truly know and pursue Him, not His stuff.

Autism has been my personal Peniel, through which He has immeasurably blessed me.  Jeremy still has autism (and God only knows what else), but the blessings have been in the brokenness… and surrender.  I used to think my son’s disability, his “brokenness,” was intolerable.  But now I find myself glorying in my own. May I forever limp in humility and submission before my God.  For when I am weak, He is strong.