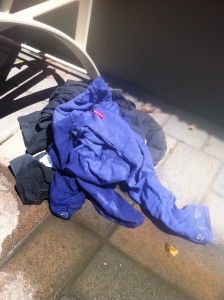 At swim lessons for the boys. Jeremy is howling in protest because the instructor is putting demands on him vs. letting him run amok in his usual chaos-in-water-free play.

A random, hyper-tan woman in a black bikini suddenly gets in my face. She’s haranguing me, “This is child abuse!” If I’m his “real mother” I must be “unconscious” to permit it. I try to explain (patiently, albeit through clenched teeth) that my child has autism, and he’s being taught by a credentialed and licensed Special Education teacher, who knows him adroitly well because she’s been his teacher for 2 consecutive years, AND she’s been teaching swimming to Special Needs kids for years.

Pulling out the autism card is usually effective in bringing about a condemnation-ceasefire. But incredulously, Ms. Hawaiian Tropic is NOT shutting up?! I’m stunned, she keeps talking over me,

“Sweetheart, no judgement, really. But love is always better than violence. You should just try loving him more…”

I ask her if is she is an expert on autism or a parent (because both the teacher and I am.) Ms. Bain De Soleil smugly replies, “I’ve worked with many autistics (“autistics” Really?  What about the canceristics or the bipolaroids?) And love is always better than violence…”

Is she for real?! I am being set up for one of those hidden camera shows??

(Help me Jesus, from going Parent-Postal) I am trying to explain but she keeps cutting me off, condescending, self-righteous,

The Holy Spirit must have intervened to extinguish two futile, independent monologues from continuing: The next thing that popped out of my mouth was a terse, “I appreciate your concern, but I no longer appreciate your concern. This conversation is over.” Something made me swivel around (I hope I accidentally whipped her with my bushy Asian hair ponytail.) Mercifully,  she finally left.

Two minutes later, fuming and mentally rehashing all the savory, distinctly un-Christian verbal savagery I wished I could have unleashed, I notice a pile of women’s clothes under a chair.

They’re not ours.  No one else is here. I’m insanely tempted to throw them into the pool, deposit them into the garbage can, or shred them with my teeth. It’s an itch I’m dying to scratch.

2) Being a follower of Jesus can be so annoying when I really want to sin. Flagrantly. Like really, really bad. Like right now.

I suddenly had greater appreciation for the immense temptation King David must have felt, when he encountered his adversary, an unsuspecting Saul, relieving himself in the cave.

Ten agonized minutes later, I snapped a picture of the clothes (in lieu of cutting them).  I collected my children and marched away, as I shot up an S.O.S prayer:

Surrender + Obedience + Submission = Lordship. Not my will, but Thine. Only for You, Jesus.  Only for YOU…

If hell hath no fury like a woman scorned, then power that controls power (fury) is real power.  I’ve been conquered.  Now, I am more than a conqueror.