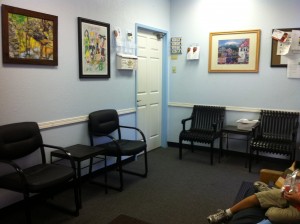 Justin and I sat in the lobby of Jeremy’s speech therapist’s office, waiting for Jeremy to finish his session. Another mom also sat with her teenage daughter, waiting for their appointment. The daughter obviously had profound, physical and behavioral challenges. Non-verbal, she would often howl or make guttural noises. She was the type of person to get stared at in public, or at least have people take a furtive second look after she’d passed by. I know about these things.

As the four of us waited, the girl continued to writhe in her chair and make inappropriate noises. Mom would hastily shush her, embarrassed, then glance at me as if to apologize and plead for tolerance: She was trying her utmost to control her child.

My heart went out to her, as I’ve often been in the identical position with Jeremy. Every time the mom would try to hush her daughter, I smiled back as desperately as I could, earnestly trying to convey just how much I understood.

Justin had been playing with some toys. He’d fashioned a pretend ice cream sundae with nesting cups and checkers pieces.

“Here mommy! Eat your ice cream cone!” Justin chimed. I silently obliged. For some reason, I felt guilty having a “normal” child who talked and played so charmingly in front of this woman I’d never met or even spoken to, yet for whom I felt such deep compassion. This, even though I too, had a non-verbal son who made guttural noises, moaned and displayed virtually the same inappropriate social behaviors.

To my horror, Justin walked over to the teenage girl with his sundae. Paralyzed, I could only watch and wait helplessly to see what mortifying thing he might do or say to her.

“Here! You can have an ice cream, too!” he piped, and proudly thrust it at her with the dimpled fists of a toddler. The girl howled with delight and flapped her arms in excitement. The mother’s eyes watered. It appeared neither of them was accustomed to having another child approach the girl to play.

Meanwhile, Justin was entirely accustomed to atypical behaviors from his older brother.  It’s all he’s ever known; For Justin, this was “normal.”

But the girl didn’t accept my son’s ice cream, nor did she reply. Justin offered it again insisting,

More howls and flapping. The mother’s delight quickly reverted to embarrassment, her eyes pleading again. I, too, was stricken with the same mortification I felt when Justin first approached.

Sure enough, the dreaded question came tumbling out of Justin’s mouth before I could stop it,

“Mommy, what’s wrong with her?”

Before I could scramble for an answer, Justin answered his own question,

The mom glanced at me, winked, and smiled again. This time, for real.

As published in the Jeena Journal, Spring 2011

Gepetto and Me: On Wanti...
How Special Needs Ministr...
Fatherhood, Hijacked | Wh...