In my previous post about Joni Camp, I mentioned the unique hallmark of JAF Family Retreat:  the overwhelming love and dedication of the Short Term Missionaries (STM).  In this post, I highlight just a few of these amazing servant-leaders. 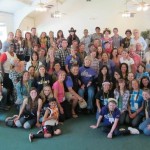 An STM is a volunteer at the weeklong Family Retreats held by Joni and Friends.  Each STM actually pays $400+ to come serve at Camp.  This is astonishing for special needs parents, who find it difficult to find a person to pay to take care of our children for even a few hours, much less an entire week.

STM’s arrive a full day early to receive 1.5 days of intensive training from veteran Joni and Friends leadership.  Each STM is then prayerfully matched with a Camper (those with a disability, as well as each typical sibling), to serve as a dedicated 1:1 helper for the week.

Some STM’s serve as a 2:1 or 3:1 team, depending on needs of the Camper, and/or preferences and experience level of the STM.  Just as each Camper is valued uniquely, so is each STM.  At Camp, everyone’s gifts and abilities are honored.  Everyone.  And everybody wins.

Some self-professed “Joni-a-holics” or “Camp Addicts,” even travel to serve at multiple Camps each year, out-of-state and internationally.  Quite literally, “Why on earth would do they do that?”

“For Christ’s love compels us…”

Such sacrificial service can’t be explained any other way.

Welcome to “Heaven on Earth!” 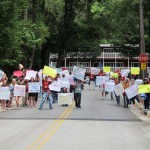 Explosion at the bridge!

“So Totally Mind-blowing” commences here.  For three hours on Camper Day, all the STM’s stand at attention, eagerly awaiting the arrival of the families.  At every car or minivan that crosses the bridge to Mission Springs, the STM’s explode with cheers and wild applause, swarming like paparazzo around a limo.  Each Camper is heralded like a champion quarterback rushing the field at Superbowl; their family name triumphantly proclaimed over a bullhorn.  It’s a foretaste of entering Heaven.

This summer was our third year at Camp.  While there are countless examples of STM’s serving selflessly, sight-unseen, here are just a few extraordinary incidents I had the privilege to witness: 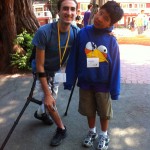 In 2011, our first year at Camp, I noticed a young man with crutches practically flying across the lawn.  He ran with sheer abandon, wearing a huge grin across his face.  I thought to myself, “Wow.  That camper sure is having a great time.”  Three days later I realized that Campers had blue lanyards, and STM’s had yellow.  Ben wore a yellow lanyard.  He wasn’t a Camper, but a STM.  I was dumbfounded, and deeply humbled.  My eyes were then opened to see he’d been streaking across the lawn in hot pursuit of his very active young charge.  After finding out the back story (Ben started out many years ago as a young, active Camper himself, who gradually matured into a seasoned STM.  He travels annually to volunteer at multiple camps,) I secretly nominated him as my son’s hero.  Like Ben, I pray that my Jeremy will be used by God to inspire others, and carry out His work in a such a breathtaking way. 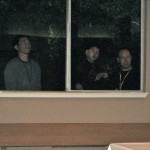 Participating in Talent Show through a side window.  Through the roof or through a window, love always finds a way.

Our son Jeremy’s first STM was Daniel, who quickly learned that Jeremy’s sensory sensitivities kept him from entering the Worship Center.  After several days of sitting outside the doors together, Daniel scoped out the building and found a side window that offered a clear view of the stage.  Daniel commandeered some chairs to create a makeshift platform for Jeremy to stand on, and armed himself with pocketfuls of Gummy Bears to keep Jeremy from wandering off.  From here, Jeremy would participate in the Talent Show.  He danced the Funky Chicken and recited Psalms 23 via wireless mic — all with the window shut.  Everyone inside could see him through the window and hear him because of the mic. But Jeremy was spared from the sensory overload of being inside with the amplification.  It was a brilliant, modern-day adaptation of bringing a paralyzed friend through the roof.  Because of Daniel’s faith and persistence (and savvy use of technology), my son could be included. 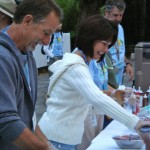 Pat’s introduction to Joni Camp began as a scooper at the annual Monday evening ice cream social.  After years of scooping, Pat prayed and took the plunge to become a first-time STM in July 2012.  I was delighted to watch Pat throwing herself into playing, dancing and loving on her young Camper with Down syndrome.  At the end of Camp, despite decades of experience as a teacher, educational consultant and conference speaker, Pat shared a humble testimony of thanks to her “angel,” for teaching her so much. 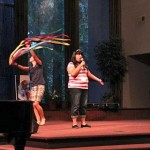 The Camp theme of 2012 was “God’s Masterpiece.”  One of my favorite, signature Talent Show moments that year came from STM Monica.  While her Camper sang, “Colors of the Wind,” Monica provided a silly dance back up.  Swinging a multi-colored flag and comically flitting about, she could have easily stolen the show. But Monica executed her contribution in a gracious and self-effacing way that maintained utmost deference and respect for her Camper.  Like a frame that serves to highlight the art, Monica didn’t detract attention, but complemented her Camper and enabled her to shine in her rightful reign at center stage. 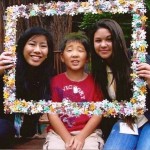 Angela and Erica, the perfect STM’s to bless and support the Kim family.

Angela was one of Jeremy’s two STM’s in July 2012.  Months after camp, Angela heard through Facebook about a Joni and Friends church respite in our area.  She eagerly drove 136 miles — incredulous, I actually calculated the distance– just to be Jeremy’s “buddy” again.  Angela had no way of knowing I had been laid off that very week from a position I’d made significant personal sacrifices for.  I was feeling betrayed, devalued and discarded.  But I was also floored that this young college student would go miles out of her way, just to minister to my family.  I was then reminded of the great distance Jesus willingly traveled, to redeem and draw near to those who were impossibly far from Him.  God reassured me, “Yes, you matter.  You are worth the effort.”  It meant so much more than just a respite.  Through Angela, God had dispatched a timely salve for my wounded soul.

Next post, more amazing stories from our recent week at Camp, including a moving personal testimony from Jeremy’s STM.

Do you have an amazing STM story or testimony?   Please share in the Comments section below!