“Who me, a Special Needs Parent? I’m the wrong person for this kid!” 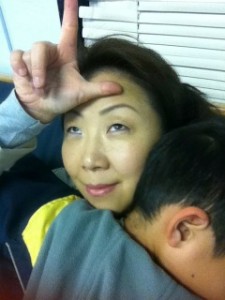 Who me? A Special Needs Parent??

My mother often laments how I am such a LOUD girl. When we’re on the phone, she typically asks me to turn down my volume.  Or better yet, speak about a foot away from the mouthpiece. She’s perplexed how such a small person (I stand 4 feet 11 and 3/4 inches) could emit such a big, booming sound. Especially for an Asian daughter, it’s considered unbecoming and uncouth.

Despite my mother’s admonishment, I find myself having to use this Loud Voice often. I’m often shouting across a playground, a mall, sometimes an entire city block.  I do so to halt my eloping child from bolting towards the street, completely unaware of oncoming traffic.  He has a tendency to walk far enough ahead of us –oblivious that the rest of us are far behind — to afford a child abductor a gloriously uncontested opportunity.  At other times, it’s as innocuous as stopping him from swiping french fries off another diner’s plate.

Sometimes, my husband (who at six feet is also a booming presence) is doing The Loud Voice. Nevertheless, I often have to chime in. His baritone merely gets absorbed into the mass of people, muffled and unnoticed, as if he’s yelling into a pillow. But my soprano-shriek is much more effective at piercing through a crowd and turning stunned heads.  Luckily, my face is as thick as my voice is shrill.  My Loud Voice could slice through ocean to let me run through it.  All in hot pursuit of my son.

“I’m not the right person for this.  I’m not patient enough.  I’m not organized enough.  I don’t even like kids.  I don’t know anything about disability.  I can’t do this!  God, pick someone else…!”

After many years gutted by insecurity and inadequacy, wracked by the sinking sense of, “I’m not the right parent for this kid.  He’s doomed, paired with me…” I finally realized the God-given purpose for this Loud Voice.  He gave me this gift for a pre-ordained reason. He knew I was going to need it to call my beloved, oblivious son back to me.  To alert him of danger, to jolt his attention to a light that’s gone red, or corral him back when we’ve turned left to his right.

“I know God made me for a purpose. But He also made me fast, and when I run I feel His pleasure.”

It took me a while to get ok with this special needs parenting gig.  But I, too, know God made me for a purpose.  And when I am booming at my beloved son to call him home, I feel His pleasure.

The same Creator who custom-made my child, also custom-fit me for him, Loud Voice peculiarities and all.  WE are His workmanship.  We are both wonderfully and fearfully made.  A heavenly ordained pairing, we’ve been knit unto each other,

For you created my inmost being; you knit me together in my mother’s womb. I praise you because I am fearfully and wonderfully made; your works are wonderful, I know that full well.

In what unique, “peculiar” ways has God hard-wired you, that bless and serve your child well?  Come on.  Deep down, you know you’ve got something.  It’s not there by accident, so let yourself dance there a little.  I dare you.  For He delights over you with singing…