Special Siblings: Why It Doesn’t Have to be a Snowman

In honor of Autism Awareness Month and National Sibling Day (April 10), today’s post celebrates the unique, complex and extraordinary bond between special needs “Sibs” and their differently-abled brothers and sisters.

Like many a kid-friendly household across the land, Frozen-mania has besieged the kingdom of Kimrendelle.  Our kids like it, too.

Elsa and Anna’s relationship dearly reminds me of the complicated yet loving “Special Sib” relationship our two boys also share.  The elder sibling carries a unique, isolating burden that no one –save their parents– can understand or appreciate.

We’ll protect her. She can learn to control it. I’m sure. Until then, we’ll lock the gates. We’ll reduce the staff. We will limit her contact with people, and keep her powers hidden from everyone.

It’s an all-too-familiar scene that makes my autism-mom-heart ache.

We’ll protect him.  He can learn to control it.  I’m sure.  Until then, we’ll lock the doors.  We’ll increase the therapy staff. We will closely monitor his contact with people, and keep his atypical behaviors hidden from everyone.

“I wish you could tell me why!” 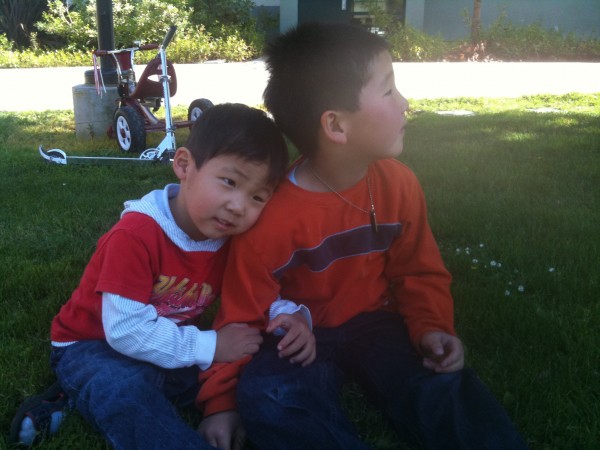 “I wish I had a regular brother, so he could play with me.  Sometimes, I wish I didn’t have an autism brother…”

Like Anna, Justin longs to play with his older sibling.  He can’t understand why Jeremy appears to shut him out, repeatedly ignoring his pleas for attention.  From birth, Justin has instinctively understood that capturing Jeremy’s attention is a rare and costly prize.  Tragically, both Elsa and Jeremy desperately crave that closeness, too.  But neither is able to explain why it’s not possible.

Or so they think.

Neither snowman nor Rain Man

Arendelle’s king and queen’s frantic attempts to separate Elsa and Anna reminded me of “Rain Man,” (Yes, we ASD parents feel ambivalence towards that movie.  Just Let it Go for a moment.)  In the film, Tom Cruise’s character, Charlie, learns the existence of a grown older brother he never knew about, Raymond “Rain Man,” an autistic savant.   Charlie discovers that their parents had institutionalized Ray, intentionally raising the two brothers apart.

That’s why they put you away.  They thought you’d hurt me.

At the reading of the will, their father left his entire estate of $3 million dollars to Raymond.  And Charlie?  All he got was rose bushes.  He was furious.  I wondered if Charlie’s self-centered reaction would have been different, had they had the chance to grow up together.

As a special needs parent, I so get this.  Our departure from this earth and Jeremy’s subsequent care are never far from our thoughts.  It’s tacitly understood that we will leave everything we have in a Special Needs trust for Jeremy. As I age, I’ll probably start to pawn off any jewelry and valuables, to contribute every possible cent towards this fund.  And Justin?  He will inherit the delicate and thorny responsibility of caring for his disabled older brother for the rest of their lives.

Please, I know you’re in there,
People are asking where you’ve been
They say “have courage,” and I’m trying to
I’m right out here for you,
Just let me in
We only have each other
It’s just you and me
What are we gonna do?
Do you wanna build a Snowman?

That scene destroys me every time.  Every. Time.  To imagine the day our boys lose both of us.  To imagine Jeremy unable to comprehend why we are no longer around.  To imagine our non-verbal son unable to ask where, why, or what happened, and unable to articulate his grief.  To imagine both sons longing to console, and be consoled by each other.

It’s a scene I’ve imagined and reimagined –yet dreaded– countless times.  It triggers a morbid obsession and denial, all jumbled up together.  It’s an unthinkable thought I can’t help but think about. 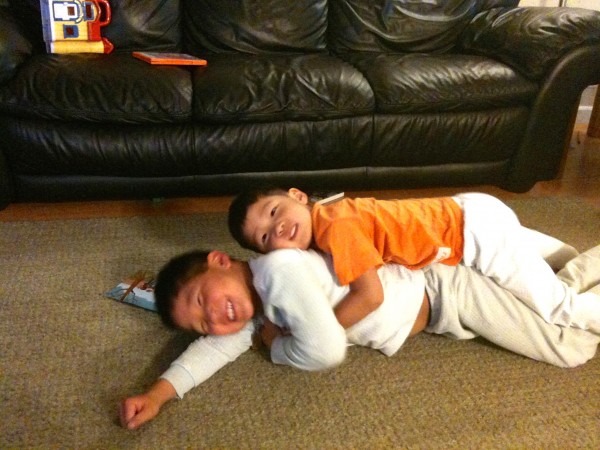 ” …But there is a friend that sticks closer than a brother…”

Because of Jeremy’s difficulty with social skills and speech, our boys have rare opportunities to connect or play in typical ways.  We’re actually happy when they fight and squabble, just like any other siblings would.  It even took years of speech therapy to teach Jeremy to say, “Justin, STOP IT!”

I delight over how Justin gets in Jeremy’s face, demanding his attention.  I smile at overhearing Justin refuse to take No (a non-response) for an answer.  Unlike every other house in the neighborhood, we savor when Justin tackles, hounds or terrorizes his brother, just to annoy and get a rise out of him.

It doesn’t have to be a snowman 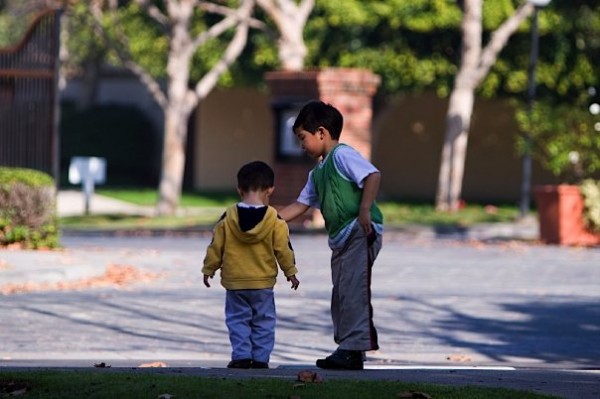 Stopped, in the name of love.  Photo: Brian Dokko

Once in a while, we’re blessed with a glimmer of Jeremy’s love for his brother.  When the boys were 2 and 6,  Justin had toddled out into the street on impulse.  Jeremy protectively pushed him back onto the sidewalk (“Anna, you can’t marry a man you just met!”)  Justin immediately shoved back, of course.

If you know anything about autism or Theory of Mind, you’re floored, too.  My brother just happened to capture the moment on camera.

A couple months ago, we found a balloon toy: A simple game taking turns shoving sticks into a balloon until it pops.  But it yielded giddy squeals and interaction between the two of them.  WE’LL TAKE IT.

Just last week, Justin made up a silly impromptu game on a road trip.  They took turns slamming their fists into Jeremy’s arm rest, like two guys hammering an anvil in a cartoon.  They cackled and cracked up.  Suddenly, that inane exchange was the most precious thing in the world.  Justin lit up knowing he was responsible for drawing his brother out and making him laugh. I was tempted to snap a picture, if only I hadn’t been driving 75 mph.

At age 7, Justin may be too young to understand the neurological complexities of autism.  Why his brother behaves this peculiar way or that.  Why his brother doesn’t do this or that, “Just like other regular brothers.”  But he does appreciate how rare it is to have his brother laugh and play together.  He’s also growing increasingly aware how different his brother is.  But that something called autism makes Jeremy Very Special. 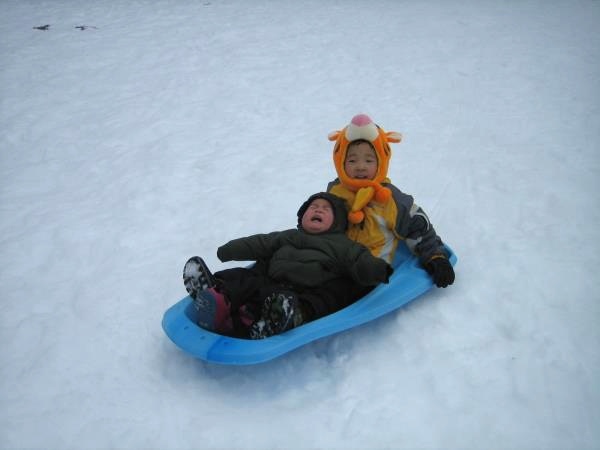 See?  It doesn’t have to be a snowman.

I’m immensely proud of the fierce loyalty and protection with which he already covers Jeremy (“Don’t you DARE make fun of my brother!  He’s SPECIAL.”)  I pray that Justin continues to grow in his love, compassion and care for his brother, in our stead.  Especially for the years ahead, I pray that someday, 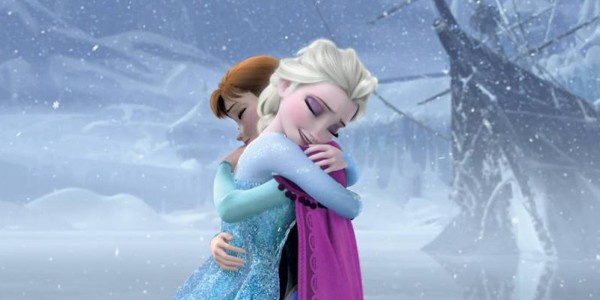 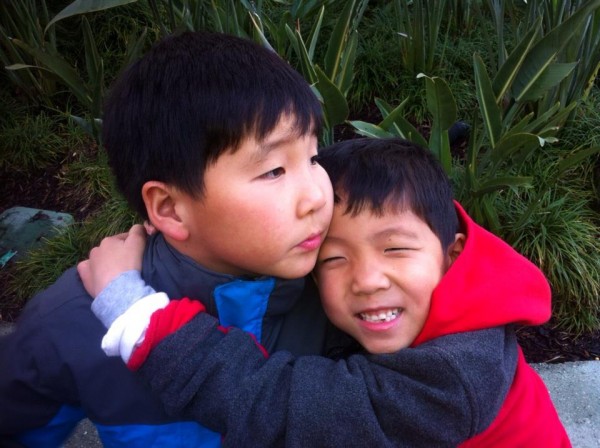 A friend loves at all times, and a brother is born for a time of adversity.

…but there is a Friend who sticks closer than a brother.

Much press goes to special needs parents and individuals with autism.  But Sibs live acutely aware of autism every day, too.  You are unsung heroes for our families.  Special thanks to all our special Sibs: past, present and future.  May God bless you richly.