School Concert: That Moment Your Kid Finally Sees You 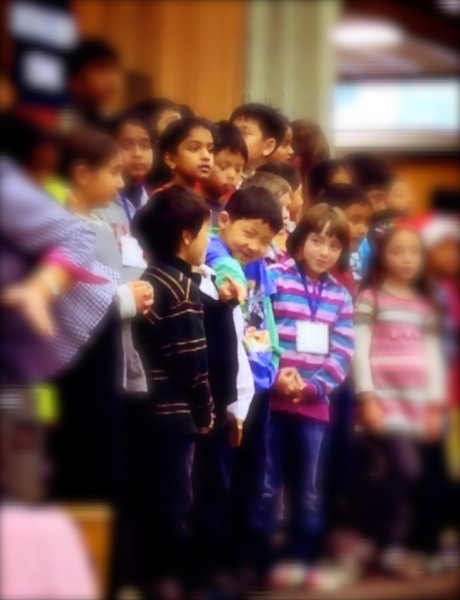 That Moment:  The best part of every kiddie concert

Like many grade school parents, I attended a holiday concert at my younger son’s school.

‘Twas the standard, seasonal fare including Jingle Bells and Silent Nights.  Some students turned out in festive dresses or collared shirts with vests.  Still others (like mine) wore distinctly un-festive, everyday school clothes.  I didn’t get the memo, it appeared.

Judging by the 200+ parents falling over themselves to jockey for the best photo angle, they also came to scope out one particular child. I, too, came exclusively for one, seven year-old boy.

The auditorium was packed, so I had to take a seat on the floor off to the side.  Students were filing into place on the choir rafters, when the inclusion of several Special Ed kids in the program caught my eye (of course.)

I watched as their aides worked heroically to keep them engaged, keep them from wandering off or touching other classmates, or from vocalizing inappropriately, etc., etc.

Usually, I’m that Parent:  A mixture of hope and heartache at watching my older son flap, squawk and have heads turn to stare. Yet irrepressibly grateful for the accommodation to include him at all.  He wouldn’t meet my gaze.  I don’t know if he ever saw me.  But his aide would always smile valiantly at me, and I would smile back.

But today, I was a “normal” parent, delighting in the cuteness of my typical child, and anticipating more cuteness to come.

Justin was already in place with his peers on the choir stands.  I smiled as I saw him craning his neck, scanning the crowded multipurpose room trying to find me.

He fidgeted and wore a look of trepidation I knew well.  I waved several times.  But in his haste, his eyes swept right past me.  It was just a matter of time before he spotted me.

Sure enough, his eyes eventually locked on to mine.  And as far as I was concerned, the brightest bulb on the tree positively lit up.  All fidgeting and anxiety vanished.  He stood taller, elbowed his neighbor and stabbed a pointy finger towards me.  Then he stared at the floor and grinned sheepishly, face all flushed and ears burning pink.

No one does bashful and charming like this gap-toothed little second grader.

A teacher stepped forward to conduct the children.  They complied obediently.

But every so often, Justin would dart a furtive glance at me.  Thoughout 45 minutes of singing and dancing, swaying and sashaying, he continued to grin and blush.

He knew I was watching him.

It’s hard to say, which of us was happier.

“Am I alone?  It feels like everyone else has someone who cares.  Will no one rush to take pictures of me?  Am I precious to no one, insignificant? Am I to fend for myself?

I, too, once roamed and scanned all about for someone to care for me, exclusively.  But the longer I searched, the more I braced for disappointment.  After all, everyone had their own precious darlings to attend to.

Then.  Just then.  I found Him.  He’d been here all along.  Hoping and eagerly awaiting the moment I’d spot Him amidst all the noise.  He even came early to stake out the best vantage point.  He was present before I ever entered the scene, and fixed His unwavering gaze onto me from the moment I arrived. Even as my heart sank, while my eyes darted to and fro, He’d been waiting, frantically waving trying to capture my attention.

It was as if I was the only kid in the room.  And the only One who really mattered, solely had eyes for me.

His presence bolstered me with confidence.  I could stand a little taller, wiggle a bit wilder, and sing a notch louder.

I’d been found.  Cherished.  To realize I was the object of such hyper-focus both enthralled and embarrassed me.

He’d never really lost me.  It just took time for me to realize He’d always been there.

Even if thousands of bodies fill the room, even if no one pays me any mind, my Father always sees me.  Even when I lose track of the beat or lose my place in the fast-paced flow of life, He’s always there to prompt,

And whether I sing, dance, wiggle, work or play, His Eyes never leave me.

He rejoices over me with singing.

What about you?   Have you been found?  Are you seeking Him?   When do you sense God’s Presence delighting over you?