Why I Don’t Mind Being a Dis-Abled Family in a Hyper-Abled World: Part 2 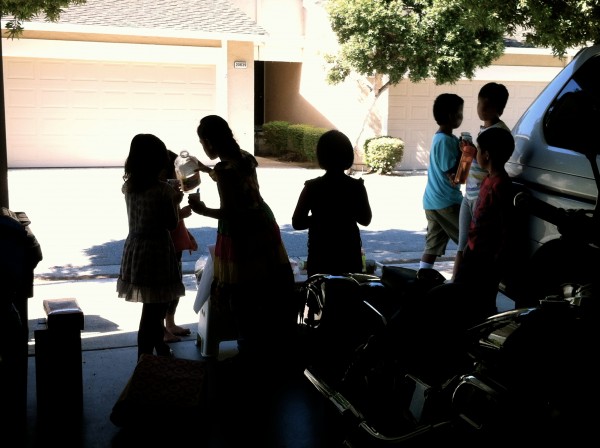 Redemptive convos, one starfish at a time

Today’s post:  A continuation from Part One, “Why I Don’t Mind Being a Dis-Abled Family in a Hyper-Abled World.”

A few weeks after we moved in, Justin set up a Snack Shack in the garage to “sell” free Otter Pops.  It was more a ploy to help him meet and make friends with the neighborhood kids (who all seemed to know each other.) 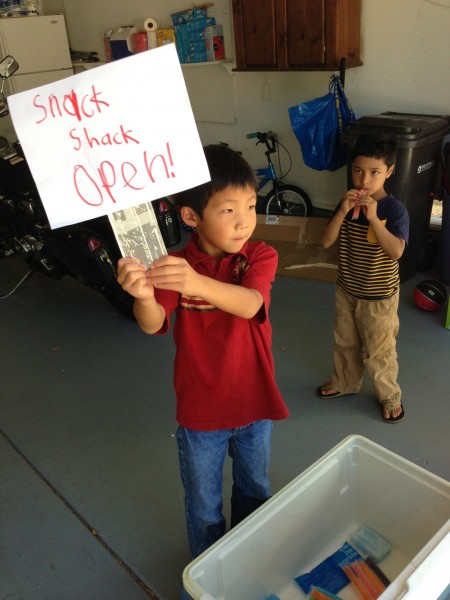 It worked.  And as kids noshed and chatted in our driveway, Jeremy hung about, too.  If we were strategic for Justin to make friends, we’d need to be even more covert and intentional about integrating Jeremy.

The younger girls were sweet and accepting of Jeremy’s atypical behaviors (inclusion always comes easier with younger ones.)  He might yelp or stand too close.  They’d blink… and just smile.  And they’d keep right on going.  No big deal.

But sure enough, several older boys the same age as Jeremy, began to notice he was “different.”  One of them stared quizzically at Jeremy when he didn’t respond to a direct question.  Another older boy noticed the exchange, and silently motioned for his peer to cross the street with him.   I watched as they shared a whispered exchange, with their backs to us.

I wonder what they said, because the confused boy looked over his shoulder at Jeremy.  Now, he had a knowing look on his face.

They didn’t come back.

“Why does he make those noises?”

Justin became fast friends with Z, a sweet 1st grade boy who lives down the street.  One afternoon, the kids were “camping” in the dining room, when I overheard the following exchange,

“Why does your brother make those noises?” asked Z.

Justin replied, “It’s his own gibberish.  My brother is special.  Very special.  So don’t you dare make fun of him!”

I smiled, pretending not to have overheard.  I snapped this picture to commemorate this precious conversation. 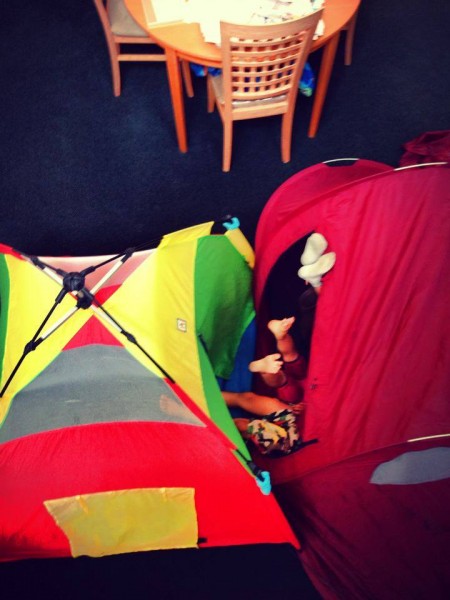 Another afternoon, Z and the boys were enjoying snacks at the dining table.  Z is equally comfortable chatting with me as much as he is with kids.  Jeremy was indulging in some self-talk. “His own gibberish,” as Justin calls it.

“That’s a great question.  He’s learning how.  Just like we’re all learning how to do stuff that’s hard.  But he thinks a lot more than he says.”

I had no idea who Ferb was.  I only had a vague notion that it might be a Disney character.  I Googled it the first chance I got.  He seemed ok.  A post to my Facebook page and subsequent thread of affirmative comments prompted a YouTube search that confirmed Ferb’s virtuosity:  Ferb was the crafty mastermind behind the duo, “Phineas and Ferb.”  But he rarely spoke.

A month later, Z came over during another episode of Jeremy’s verbal stimming.   This time, Z remarked with sheer awe and amazement,

“Jeremy is so cool.  He can talk like a Minion!”

Them’s hallowed skills to a 1st grader.  I began to treasure this sweet neighbor boy and his earnest heart.  He’d run into our house each afternoon with a hurried, “Hi Mrs. Kim!  Hi Jeremy!” before bounding upstairs to Justin’s room.  This was always bookended with “Bye Mrs. Kim!  Bye Jeremy!” every time he ran out.

Several weeks later,  Z’s mom texted me some precious pictures.  Our boys had been showing up in Z’s schoolwork.   And Jeremy was being included there, too.  Each and every unsolicited “…and Jeremy!” was precious.

For Halloween, Justin wanted to set up a carnival in the driveway, to entice kids to hang out when they came for candy.  Even though the “games” were things like Toss the Sock Into the Laundry Basket, or Draw a Chalk Circle Around My Brother, it worked.

Jeremy –anchored in place by two fistfuls of pizza– it was his “job” to keep a lawn chair from moving as kids drew circles around it/him. 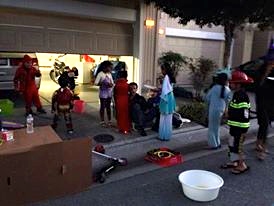 Three nights later, we celebrated Diwali for the first time.  Well, more like we came outside to investigate when we heard firecrackers going off in November.   Evidently, Diwali is a big deal in our neighborhood.  It seemed like the whole block was out, families hanging out to enjoy fireworks together.

Jeremy zeroed in on some sparklers.  Justin shirked behind, scared.  Our next door neighbor graciously offered Jeremy a stick.  One quickly turned into six.  He loved them, which meant I loved them.  This Asian American Christian lady was getting all happy over an Indian Hindu holiday, because it gave Jeremy the opportunity to discover the joy of sparklers.

The parents started chatting as the kids played.  I was delighted to learn our next door neighbor worked as a Special Ed aide.  It gave me great comfort to know she understood Jeremy, and wouldn’t be intimidated at having a family like ours next door.  Even when Jeremy  creamed through their supply of sparklers, none of them seemed to mind.

Three weeks later, Justin insisted on another Snack Shack.  Again, the neighborhood kids came out in droves, including some of the older boys.  I was delighted when one of the girls suddenly exclaimed,

“You know Jeremy?  He’s so brave!  He’s really good with sparklers!  Justin was scared, but Jeremy really liked them…”

I sure hope those older boys heard.  Because my boy is cool.  There’s so much to appreciate and learn from him.

Silicon Valley may very well continue on as the technology capitol of the world, its children the next generation of spelling bee champions, programmers, tech innovators and executives.

Through their distinguished schools and afterschool programs, they will maximize every educational resource available.  Just as my parents had immigrated to the US with their hopes for me.

But I hope they supplement their education even further with invaluable lessons in compassion, inclusion and appreciating diversity.

I hope they grow up set on a meaningful path to somewhere; not just on a frenetic Race to Nowhere. 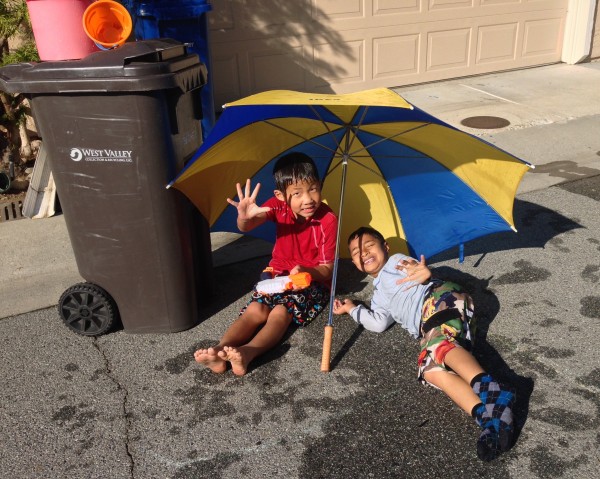 “Waterpark” in Cupertino, CA, the (literal) home of innovation.

Meanwhile, some of us will be over here, constructing water parks with garbage cans, setting up Snack Shacks and carnivals, hoping to lure kids out of their homes and into our driveway.  Over Cheez Its and popcorn, we hope to influence impressionable young minds into reconsidering atypical sixth grade peers who may not be able to talk, but can rattle off a killer Minion.  When communication is 90% non-verbal, never underestimate the efficacy of a killer Minion.

We hope to sway them into viewing others who are different with compassion and respect.  Maybe even a little bit of awe.  We can only hope to shape their understanding, that while we may be different ethnicities, religions and abilities, we are all the same.  Because inside, we share a truly common core:  the need to belong, the need to be accepted, and the need to be loved.

Just like the Starfish Story, we may not be able to change the entire world.  But I’d like to think our humble Snack Shack is making a difference, at least in a cozy little cul de sac in Cupertino, CA.

One starfish, Snack Shack and kid at a time

My immigrant parents don’t measure their daughter by how many handbags, vacations or luxury cars I buy for them.  They know there’s much more to our lives than that.

I’ve learned not to measure my children exclusively by their GPA or test scores.   I know there’s much more to their personhood than that.

I’m also learning to not measure myself by unrealistic standards, by comparison or contrast.  There’s much more to me than that.

The myth of the Super Christian, Supermom and Photoshopped standards of beauty be damned.  From now on we regard no one from a worldly point of view.

Because you’re never old or too cool for sparklers.

Because you’re never too Christian for Halloween or Diwali.

Because there’s more to education than GPA’s and API’s.

Because there’s more to the “good life” than what we output or intake.

Whether or not my children ever become national Merit scholars, I hope they’ll learn how to be a good friend; how to disagree with civility and respect, yet not compromise their convictions; how to talk and reason things out; how to say, “I’m sorry.  I messed up.  Are we cool?”  How to grow up into men of integrity, character, honor and sacrifice; to work hard to maximize their unique, God-given gifts to bless and serve others.  To let their light shine bright, so that the world would see their good deeds and glorify their Father in Heaven.

Even if they don’t grow up to take part in the national discourse, they’ve already engaged in a critical dialogue, right here and now.

Redemptive conversations don’t require million dollar spelling words. Sometimes, they need no words at all.  Priceless exchanges can happen over popcorn and popsicles.

And for all it, I am profoundly grateful.