Why did God let this happen? Did You lead us out here to die? 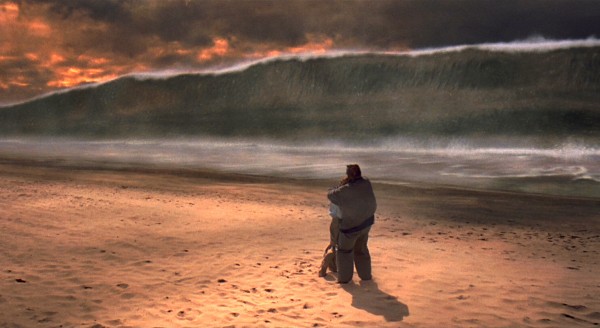 Scene from the movie “Deep Impact.”

“Did You lead us out here to die?”

As Pharaoh approached, the Israelites looked up, and there were the Egyptians, marching after them. They were terrified and cried out to the Lord. They said to Moses, “Was it because there were no graves in Egypt that you brought us to the desert to die? What have you done to us by bringing us out of Egypt? Didn’t we say to you in Egypt, ‘Leave us alone; let us serve the Egyptians’? It would have been better for us to serve the Egyptians than to die in the desert!”

Moses answered the people, “Do not be afraid.  Stand firm and you will see the deliverance the Lord will bring you today. The Egyptians you see today you will never see again. The Lord will fight for you; you need only to be still.

Boxed in by armies and sea, the Israelites’ terror was understandable.  So was their chagrin.  They had just experienced God’s miraculous deliverance and freedom from slavery.  As they exited Egypt in jubilant procession, their victory march into the Promised Land was imminent.  Then, hardly a few steps out, they hit a wall.

God does not set us up to fail

In 2002, convicted of God’s leading, we left our jobs, uprooted our family and moved to an unfamiliar country on foreign missions.  Our return home was accompanied by a triumphant parade of testimonies.  Then, a handful of months after stepping off the plane, we hit a wall.  We got slammed with autism.

“What was that all about?  Was it because there were not enough agnostics and cynics in the world, that You gave us this reason to doubt You?  Why did You have us profess all these testimonies about You, only to make us double-back on our words? It would have been better if we’d never followed You at all!”

I wanted to quit. Quit ministry, quit church, and quit God.  “How could You do this to us?  After all we went through to follow You?”  Walled in by impossibility on every side, we could not go back.  We could not go around.  We could only go through.  Where else could we go?   There was no returning this “broken child,” and there was no opting-out of autism.  Like the Israelites, I felt duped, stuck and trapped.

If He leads you to it, He will lead you through it

Bible scholars say the quickest route to Mount Sinai would have deposited the Israelites squarely into the launching point of the Egyptian military.  Forced to travel through heavily fortified enemy territory, the children of Israel would have had to fight their way out.

They had no way of knowing this, but an omniscient God knew.  He knew this fledgling nation could not survive such a battle.  Out of His foresight and compassion, He set them on an alternate course through the lesser impeded path of the Red Sea.

What appeared to God’s people as “leading them out here to die,” had been His wisdom and mercy.  Providence then positioned the Israelites and their detractors into front-row seats, poised to witness the most spectacular display of His supernatural power.

God doesn’t always remove, alleviate or exempt His Children from the impossible.  In fact, He may even position them to forge headfirst into it, but always fully empowered by His presence and purposes.  Rather than entrapment, He hems us in, behind and before, to position us to experience deliverance by His Hand, not by our puny human efforts.

The God of Israel, the God of Today

All He has been in the past, cannot help but splash into the present and spill over into our future.  He who was, and is, and is to come cannot be untrue to Himself.

Our family had no choice but to walk into the terrifying impossibility of autism, ADHD/Anxiety NOS, and additional spiritual storms that would later befall.  But the eleven year journey thus far, has always yielded a far more spectacular display of His power and providence than had we insisted,”If there be any other way!”

Whatever the diagnosis, disappointment or other looming disaster that threatens to engulf us, trust in the proven character of God.  He already knows what He is about to do.  Even now, He stands at the ready, poised to unleash unimaginable waves of blessing.  Immeasurably more than we could ask or imagine.

He who hovered over the formless and deep, He who separated waters from the vast expanse, and ushered in good, good and very good, hovers over us still.  He will forge a new way from no way.

He did not lead us out here to die.  “Do not be afraid.  Stand firm and you will see the deliverance the Lord will bring you. The Lord will fight for you; you need only to be still.”  Perceive His voice through the howling of the squall.  The same voice who rolled back the waves and ordered them, “Here and no further,” whispers to us today,

“Whether you turn to the right or to the left, your ears will hear a voice behind you, saying, “This is the way; walk in it….”

What are you up against, that looks impossible to go through?   After you’ve done all you can humanly do, be still and know that He is God.  He will do what only He can do.

Waiting through fear and ...
Faith Through Disappointm...
When Normal Is the New We...