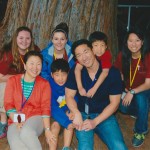 In two earlier posts, I summarized the wonders of Joni Camp, and featured a handful of the amazing STM’s.  The series continues with more STM stories from our recent June 2013 Camp.

None of these STM’s were conscious of being watched.  They were focused on their Camper, immersed in just serving and loving them.  But many of us couldn’t help but notice these extraordinary acts of sacrificial service.  Especially in a world of Me First, “Other-centeredness” stands out.  In our world’s economy, it doesn’t make any sense to pour out lavishly for people who did nothing to earn it, much less could never pay you back, 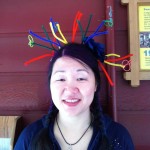 June 2013 was Grace’s first time at Joni Camp.  I’ve known Grace for more than a decade,  since she was a freshman in college (I won’t incriminate either us by quoting exact numbers 🙂  As a pastor’s kid, I’ve known her to be a dutiful daughter and faithful servant in the church.  While Grace always had a heart for children, serving for years as a children’s ministry teacher, Camp took her waaaay out of her comfort zone.  For months in advance, Grace checked out books and videos on disabilities, and peppered me with questions about autism and special needs parenting.  She even took a sign-language class, became First-Aid/CPR certified, and took a Facebook poll which color she should dye her hair for Crazy Hair Day.

At Camp, it came as no surprise that she was unofficially voted, “Most Prepared STM/Den Mother,” by her fellow STM cabinmates.  The same Spirit that prepared extravagantly for the arrival of His first children, had empowered Grace to prepare just as eagerly.  This first-time STM blessed many — all before she ever laid eyes on her Camper. 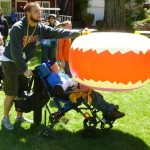 Belly Bumping fun for everyone. Yes, everyone!

Walter is veteran STM.  For the past three summers, I’ve observed that he usually gets paired with Campers having the most delicate medical conditions or complex behavioral challenges.  Yeah, daunting stuff.  But it was He who gave some to be pastors, some to be teachers… and some to be So Totally Mind-blowing STM’s like Walter, so that the Body of Christ may be built up.  June 2013 was no exception.  When Walter wasn’t wearing his Blue Man Group all-body unitard (you just have to see to believe), he was enabling extraordinary moments like this.

Walter’s Camper this year has complex medical needs that his amazing mother chronicles in an awe-inducing blog.  As a result, his family spends much of the year at home, or at the doctor’s office, and feeling very isolated.  While Campers bounced about, wearing giant inflatable tires called, “Belly Bumpers,” Walter  scooted his Camper’s wheelchair with one hand, while supporting the Belly Bumper with the other.  They raced, cackled and bounced around with the lot of ’em.  To see the extraordinary lengths these STM’s  go through to include their Campers, blesses families to tears. 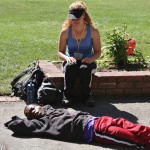 Finding their place in the sun.  No hurries, no worries.

Valerie is another seasoned STM.  Apparently, her Camper had a penchant for lying down on the ground to soak up the warmth of the sun… and the concrete.  Evidently, he didn’t care for the Slip ‘N Slide, rock wall, or even jumbo Belly Bumpers.  For families affected by disability, running around to back to back therapies or doctor’s appointments is de rigour.  Perhaps taking a break from the grind of daily life was pleasure enough for this Camper.

Throughout the week, this leisurely duo was often spotted sprawled out on the asphalt together, napping, chatting and just enjoying each other’s company.  No back-to-back appointments to rush off to; no stress of trying keep up with everyone else.  Just meeting a Camper where he is, loving and honoring him in a way that’s as unique as he is.  Both STM and Camper were blessed and blissed.  You couldn’t tell who was happier. 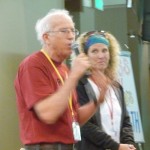 “Even a 63-year-old guy like me can serve and be blessed!”

On the last day of Camp, families and STM’s are invited to share their experiences about the week.  Steve is 63 years old and served as a first-time STM, together with his daughter. “Even a 63-year-old guy like me can serve and be blessed!”  And because he did, we were so very blessed, too.

I’ve waxed on effusively (two blog posts!) on how the STM’s bless the families.  That’s understandable and perhaps even expected.  But unbeknownst to me, as I’d been preparing this series about Camp, one of Jeremy’s STM’s, Bailey, had been reflecting, too. 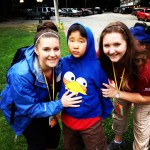 We were blessed to have Bailey and Jennie, two Joni and Friends Cause for Life Interns as Jeremy’s STM’s.  Excerpts from Bailey’s full testimony, below:

No amount of course-work, statistics, or personal stories could have fully prepared me for what I would see in Mission Springs, California this past week….When Mr. Jeremy Kim, my 11 year-old camper, jumped out of the car, I knew I had my hands full. He took off running, which I ended up doing quite a lot of throughout the week, and headed straight for the trees where he began climbing… I remember looking up at him climbing on the Redwood trees and praying, “God, use Jeremy to teach me something. Allow me to get inside of his world and learn from him.”  He answered my prayer.

I learned that Jeremy has more joy than I will ever know… God used an 11 year-old boy who is so different from me to show me things that I need to change about myself….On Tuesday night, we had a square dance…we watched as people of all shapes, sizes, abilities, and colors danced together joyously. I had tears in my eyes nearly the entire time as I saw beaming faces and laughter and I knew that this is what it must be like to experience heaven on earth…

It was so messy. Kids were sitting in the floor, campers were participating by playing tambourines and toy drums on the altar, and some of the campers were dancing or walking around…. Isn’t this how the Church should be?  Welcoming in those who are ostracized and excluded and making them feel loved?  God uses down syndrome, and autism, and quadriplegia, and every disability for His glory. So why doesn’t the church seem to see that?  I have never experienced something so beautiful in my life.

God bless you Bailey.  From energetic high schoolers like Melodie and Naomi, to experienced educators like Pat, or 63 year-old gentlemen like Steve;  From special needs parents to volunteers, our testimonies illustrate, holistically, how a healthy Body ought to function:

As it is, there are many parts, but one body. The eye cannot say to the hand, “I don’t need you!” And the head cannot say to the feet, “I don’t need you!” On the contrary, those parts of the body that seem to be weaker are indispensable, and the parts that we think are less honorable we treat with special honor. And the parts that are unpresentable are treated with special modesty, while our presentable parts need no special treatment. But God has put the body together, giving greater honor to the parts that lacked it, so that there should be no division in the body, but that its parts should have equal concern for each other. If one part suffers, every part suffers with it; if one part is honored, every part rejoices with it.

“By this everyone will know that you are my disciples.”

Bailey is right: this is how the Church should be.  And because of STM’s like her, Monica, Angela and many more disability ministry champions God is raising up, the Church — and the world– will see it.  Some of us already have:

*** If you enjoyed this post, SUBSCRIBE via email to receive new posts, delivered weekly to your Inbox ***